‘We then sailed on up the narrow strait with wailing. For on one side lay Scylla and on the other divine Charybdis terribly sucked down the salt water of the sea. Verily whenever she belched it forth, like a cauldron on a great fire she would seethe and bubble in utter turmoil, and high over head the spray would fall on the tops of both the cliffs… So we looked toward her and feared destruction; but meanwhile Scylla seized from out the hollow ship six of my comrades who were the best in strength and in might.’   Odyssey 12.235ff.  (online text: Eng., Grk.)
[here and below quotes are selective; follow links for complete passages]

Circe states the choice between Scylla and Charybdis is itself a choice with the even more dangerous “wandering” (Planctae) rocks  (Od. 12.59ff., 23.327),  which only the Argo has safely passed through (12.70-72). Circe’s reference to the Argo specifies that Odysseus’ journey is not that of the Argo, but many have wondered whether Homer has borrowed from Argo myth for many of its episodes or Apollonius of Rhodes has simply borrowed from the Odyssey for his version of the story—or some mixture of the two (shared episodes also include Circe, Sirens). These wandering rocks seem similar to the ‘dark’ (Cyaneae) or “clashing” rocks at the opening of the Black Sea, also featured in Argo myth. Circe reference of the fiery blasts of the “wandering rocks” has encouraged their localization among the volcanic Aeolian Islands, which are near the Straits of Messina. Scylla is localized at the modern Italian seaside resort town Scilla, north of Reggio, with its high fort-encrusted crag; Charybdis is localized in the strait, often near Messina, often with rationalizing reference to tidal waters or “whirlpools.”

Thucydides, History of the Peloponnesian War 4.24.5

“The strait in question consists of the sea between Rhegium and Messina, at the point where Sicily approaches nearest to the continent, and is the Charybdis through which the story makes Ulysses sail…”
(online text: Eng., Grk.)

649-52: “Others shall wander beside Syrtis and the Libyan plains and the narrow meet of the Tyrrhenian Strait and the watching-place fatal to mariners of the hybrid monster that formerly died by the hand of Mecisteus.”
(online text: Eng., Grk.)

“And the heroes, seized by anguish, left the Sirens, but other perils still worse, destructive to ships, awaited them in the meeting-place of the seas.  For on one side appeared the smooth rock of Scylla; on the other Charybdis ceaselessly spouted and roared.”
(online text: Eng., Grk.)

“See for instance how Homer’s description of Scylla agrees with what really happens at the Scyllaean rock, and the taking of the sword fish….This would lead us to conjecture that the wandering described by Homer was near Sicily, because he has assigned to Scylla the kind of fishing which is indigenous to the Scyllaean rock; and because what he says of Charybdis correctly describes what does happen in the Straits. But the “”Thrice sends she up the darksome tide,” in stead of twice “a day,” is an error to be ascribed to the copyist or the geographer.”
(online text: Eng., Grk.)

“For on one side appeared the smooth rock of Scylla; on the other Charybdis ceaselessly spouted and roared; in another part the Wandering rocks were booming beneath the mighty surge, where before the burning flame spurted forth from the top of the crags, above the rock glowing with fire, and the air was misty with smoke, nor could you have seen the sun’s light.”
(online text: Eng., Grk.)

3.439ff.: “The right side Scylla keeps; the left is given/to pitiless Charybdis, who draws down/to the wild whirling of her steep abyss/the monster waves, and ever and anon/flings them at heaven, to lash the tranquil stars./But Scylla, prisoned in her eyeless cave,/thrusts forth her face, and pulls upon the rocks/ship after ship; the parts that first be seen/are human; a fair-breasted virgin she,/down to the womb; but all that lurks below/is a huge-membered fish, where strangely join/the flukes of dolphins and the paunch of wolves./Better by far to round the distant goal/of the Trinacrian headlands, veering wide/from thy true course, than ever thou shouldst see/that shapeless Scylla in her vaulted cave,/where grim rocks echo her dark sea-dogs’ roar.”
(online text: Eng., Lat.)

Met.13728ff.: “Favored by the tide,/and active oars, by nightfall all the fleet/arrived together on Zanclaean sands./Scylla upon the right infests the shore,/Charybdis, restless on the left, destroys./Charybdis swallows and then vomits forth/misfortuned ships that she has taken down;/Scylla’s dark waist is girt with savage dogs.”
(online text: Eng., Lat.)

Heroides (Medea): “Would the Stymplegades had caught and crushed us out together, and that my bones were clinging now to yours; or Scylla the ravening submerged us in the deep to be devoured by her dogs – fit were it for Scylla to work woe to ingrate men! And she who spews forth so many times the floods, and sucks them so many times back in again – would she had brought us, too, beneath the Trinacrian wave!
(online text: Eng., Lat.)

1.2.9: “Homer’s narrative is founded on history. He tells us that … the districts surrounding the strait were unapproachable; and Scylla and Charybdis were infested by banditti.”
(online text: Eng., Grk.)

1.2.16: “[Polybius] then goes on to describe the manner in which they catch the sword-fish at Scyllaeum. One look-out directs the whole body of fishers, who are in a vast number of small boats, each furnished with two oars, and two men to each boat. One man rows, the other stands on the prow, spear in hand, while the look-out has to signal the appearance of a sword-fish. (This fish, when swimming, has about a third of its body above water.) As it passes the boat, the fisher darts the spear from his hand … Afterwards they trail it to the shore, or, unless it is too large and full-grown, haul it into the boat. … From these facts (he says) we may conclude that Ulysses’ wanderings were close to Sicily, since Homer describes Scylla as engaging in a pursuit exactly similar to that which is carried on at Scyllaem. As to Charybdis, he describes just what takes place at the Strait of Messina … ”
(online text: Eng., Grk.)

1.2.36: “Homer has described to us the phenomena of the ocean under the form of a myth; this [art] is very desirable in a poet; the idea of his Charybdis was taken from the ebb and flow of the tide, and was by no means a pure invention of his own, but derived from what he knew concerning the Strait of Sicily. And although he states that the ebb and flow occurred thrice during the four and twenty hours, instead of twice (Each day she thrice disgorges, and each day Thrice swallows it” [12.105]) we must suppose that he said this not through any ignorance of the fact, but for tragic effect…”

“What, when the maid of Sicilian Pelorus, her waist begirt with dogs, opened all her gaping throats together? ”
(online text: Eng., Lat.)

Pomponius Mela, Description of the World 2.116

“[The strait of Messina] is frightful, violent, and renowned for the savage names of Scylla and Charybdis. Scylla is a rock, Charybdis the sea. Both are dedly to those who are driven onto them.”
(online text: Eng., Lat.)

Ptolemy links the Scyllaeum promontory with the Strait of Messina.

“The promontory of Italy on the side nearest to Sicily, is called Rhegium, because things broken off are designated by that term in Greek. Nor is it strange that antiquity should have been full of fables concerning these parts, in which so many extraordinary things are found together. The sea, in the first place, is nowhere so impetuous, pouring on with a current not only rapid but furious, not only frightful to those who feel its effects, but to those who view it from a distance. So fierce is the conflict of the waves as they meet, that you may see some of them, put to flight as it were, sink down into the depths, and others, as if victorious, rising up to the skies. Sometimes, in one part, you may hear the roaring of the sea as it boils up; and again, in another part, the groaning of it as it sinks into a whirlpool. Next are to be observed the adjacent and everlasting fires of Mount Aetna and the Aeolian islands, which burn as if their heat were nourished by the sea itself; nor indeed could such a quantity of fire have endured in such narrow bounds for so many ages unless it were supported by nourishment from the water. Hence fables produced Scylla and Charybdis; hence barkings were thought to have been heard; hence the appearances of monsters gained credit, as the sailors, frightened at the vast whirlpools of the subsiding waters, imagined that the waves, which the vortex of the absorbent gulf clashes together, actually barked.”
(online text: Eng., Lat.) 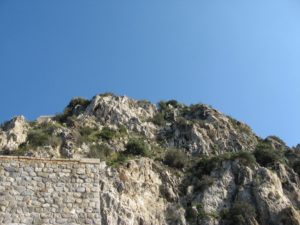