‘…and we came to the isle of Aeaea, where dwelt fair-tressed Circe, a dread goddess of human speech, own sister to Aeetes of baneful mind; and both are sprung from Helius, who gives light to mortals, and from Perse, their mother, whom Oceanus begot.’   Odyssey 10.135ff.  (online text: Eng., Grk.)
[here and below quotes are selective; follow links for complete passages]

Pliny 3.9 monte circeo boundary “Latium10 has preserved its original limits, from the Tiber to Circeii11, a distance of fifty miles:”

“And Circe the daughter of Helius, Hyperion’s son, loved steadfast Odysseus and bore Agrius and Latinus who was faultless and strong: also she brought forth Telegonus by the will of golden Aphrodite. And they ruled over the famous Tyrsenians (Etruscans), very far off in a recess of the holy islands.”
(online text: Eng., Grk.)

“Apollonios, following Hesiod, says that Kirke came to the island over against Tyrrhenia on the chariot of Helios. And he called it Hesperian, because it lies towards the west.”
(online text: Eng. [here fr. 46 Evelyn-White])

” The Latins come after Etruria and continue to Kirkaion. The tomb of Elpenor is located among the Latins.”
(online text: Eng., Grk.)

3.311ff.: “[Aeetes] ‘I myself was whirled along it in the chariot of my father Helios, when he took my sister Kirke to the Western Land and we reached the coast of Tyrrhenia, where she lives, far, far indeed from Kolkhis.’ ”
(online text: Eng., Grk.)

4.662ff.: “And quickly from there they passed through the sea, beholding the Tyrrhenian shores of Ausonia; and they came to the famous harbour of Aeaea, and from the ship they cast hawsers to the shore near at hand. And here they found Circe…”
(online text: Eng., Grk.)

“There, according to the natives, dwelt Circe, and they shew Elpenor’s tomb, on which grow myrtles like those used for garlands,though other kinds of myrtle are large trees.”
(online text: Eng., Grk.)

“It is true, Circe has divine honors paid her by our colony of Circaeum [Monte Circeo]…”
(online text: Eng. , Lat.)

7.10ff.: “Close to the lands of Circe soon they fare [after leaving Avernus], / Where the Sun’s golden daughter in far groves / Sounds forth her ceaseless song…”
(online text: Eng., Lat.)

Met. 14.8ff.: “All these behind him, Glaucus, swimming on / with his huge hands through those Tyrrhenian seas, / drew near the hills so rich in magic herbs / and halls of Circe, daughter of the Sun….”
(online text: Eng., Lat.)

“At 290 stadia from Antium is Mount Circaeum [Monte Circeo], insulated by the sea and marshes. They say that it contains numerous roots, but this perhaps is only to harmonize with the myth relating to Circe. It has a small city, together with a temple to Circe and an altar to Minerva; they likewise say that a cup is shown which belonged to Ulysses.”
(online text: Eng., Grk.)

Pomponius Mela, Description of the World 2.71

“…Tarracina [Terracina], Circeia (once the home of Circe), Antium [Anzio]…”
[cf. Mela’s report of “Aeaee” as the island of Calypso on the Calypso page] (online text: Eng., Lat.)

3.5: “Next come the former site of Aphrodisium, the colony of Antium, the river and island called Astura, the river Nymphaeus, the Clostra Romana, and Circeii [Monte Circeo], formerly an island, and, if we are to believe Homer, surrounded by the open sea, though now by an extensive plain.”
(online text: Eng., Lat.)

Diodorus of Sicily, Library of History 4.45

“…according to some historians she left the Pontus and settled in Italy on a promontory which to this day bears after her the name Circaeum.”
(online text: Eng., Lat.)

Ptolemy linked the Circaeum promontory with the mid-west coast of Italy. 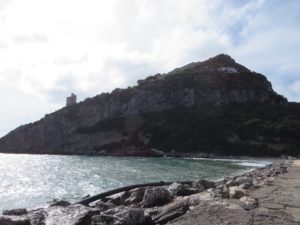