‘“Meanwhile the well-built ship speedily came to the isle of the two Sirens, for a fair and gentle wind bore her on. Then presently the wind ceased and there was a windless calm, and a god lulled the waves to sleep…the Sirens failed not to note the swift ship as it drew near, and they raised their clear-toned song: “‘Come hither, as thou farest, renowned Odysseus, great glory of the Achaeans; stay thy ship that thou mayest listen to the voice of us two.”’   Odyssey 12.181ff. (online text: Eng., Grk.)
[here and below quotes are selective; follow links for complete passages]

712f.: “And he shall slay the triple daughters of Tethys’ son, who imitated the strains of their melodious mother: self-hurled from the cliff’s top they dive with their wings into the Tyrrhenian sea.”
(online text: Eng., Grk.)

1.2.12-13: [Strabo quoting Eratosthenes, disputing Odyssean localization]:
“…or some of them assert that the Sirenes of Homer are situated close to Pelorus [Cape Faro of Sicily, across from Scilla], and others that they are more than two thousand stadia distant, near the Sirenussae [cape of Sorrento], a three-peaked rock which separates the Gulfs of Cummaea [Bay of Naples] and Posidonium [Gulf of Salerno] …”
[Strabo criticizes this description, describing the Sorrento peninsula with its temple to Minerva before referring to Li Galli]:
‘while on the other side, looking towards the Gulf of Poseidonia, lie three uninhabited rocky little islands, called the Sirens… ”
[ in 1.2.13 Strabo mentions a monument in Naples of Parthenope, one of the Sirens, and again mentions Li Galli before concluding]:
” …we are more confident still that the position of the Sirenes was some where close by [Naples].”
(online text: Eng., Grk.)

5.4.8: “Surrentum, [a city] of the Campanians, from whence the Athenæum, called by some the promontory of the Sirenussæ, projects [into the sea]; upon its summit is the temple of Minerva, founded by Ulysses. From hence to the island of Capreas the passage is short; after doubling the promontory you encounter various desert and rocky little islands, which are called the Sirenussæ.
(online text: Eng., Grk.)

6.1.1: “Thence, sailing out past the gulf, one comes to Leucosia [Licosa] an island, from which it is only a short voyage across to the continent. The island is named after one of the Sirens, who was cast ashore here after the Sirens had flung themselves, as the myth has it, into the depths of the sea. In front of the island lies that promontory which is opposite the Sirenussae and with them forms the Poseidonian Gulf…The whole voyage along the coast of Leucania is six hundred and fifty stadia. Near Laüs is the hero-temple of Draco, one of the companions of Odysseus…”
(online text: Eng., Grk.)

Pomponius Mela, Description of the World 2.69

Ptolemy links the Sirenussae islands with the southwest coast of Italy 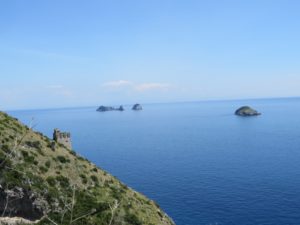