‘…we came to the land of the Cyclopes, an overweening and lawless folk, who, trusting in the immortal gods, plant nothing with their hands nor plough…’ Odyssey 9.109ff. (online text: Eng., Grk.)
[here and below quotes are selective; follow links for complete passages]

Polyphemus was localized in antiquity on the east side of Sicily, near Aetna. Pliny’s reference to Cyclopes and Laistrygonians  at “the very center of the earth,” Sicily and Italy, strikingly underscores how a centrifugal journey of Odysseus in the exotic west became perceived as within the Roman world. At some point the volcanic Aeolian Islands or Aetna were conceived of as a natural forge for Cyclopes helping Hephaestus/Vulcan make lightning and thunder for Zeus (see, e.g., Callimachus, Hymn to Artemis 6-10, 81-86; Virgil, Aeneid 8.426-32) . This would be the Hesiodic kind of Cyclopes, not the Homeric kind, who are portrayed as an exotic tribe of humans (for the various types of ancient Cyclopes, cf. R. Mondi, ‘The Homeric Cyclopes: Folktale, Tradition, and Theme,” TAPA 113 (1983) and R. Buxton, ‘Landscapes of the Cyclopes’ in G. Hawes [ed.] Myths on the Map [2017]). By the time of Theocritus, Polyphemus myth included a story of his love for the sea nymph Galatea, a story that eventually included the murder of a rival Acis, who is transformed into the Sicilian river Acis (Ovid, Met. 13.885ff.).

As Pliny at least indicates, offshore volcanic rocks north of Catania near Acitrezza were equated with the rocks hurled by Polyphemus at the escaping Greeks. Nearby is a small island, very close to the shore, called Lachea, apparently after the obscure adjective λάχεια (or is it a proper noun?) that describes the island offshore of the land of Cyclopes in Book 9 of the Odyssey (conventionally called “Goat Island”). Cluver in the early 17th c. argued that the Egadi off of Trapani on the west side of Sicily provided a more appropriate “Goat Island,” a hypothesis developed at length by Samuel Butler in the late 19th c. (see further the section ‘Modern Localization’ on this site).

Thucydides, History of the Peloponnesian War, 6.2.1

“The most ancient inhabitants in a part thereof [Sicily] are said to have been the Cyclopes and Laestrigones…”
(online text: Eng., Grk.)

“SILENUS. And as we were rounding Cape Malea, an east wind blew down on the ship [20] and cast us to land near this crag of Aetna, where Neptune’s one-eyed sons, the man-slaying Cyclopes, dwell in their remote caves.”
(online text: Eng., Grk.)

7.151ff.: “And the mighty Polypheme who kept sheep beside the Anapus [a Sicilian river] and had at ships with mountains, was it for such nectar he footed it around his steading – such a draught as ye Nymphs gave us that day of your spring by the altar of Demeter o’ the Threshing-floor?”
(online text: Eng., Grk.)

“A spreading bay is there, impregnable to all invading storms; and Aetna’s throat with roar of frightful ruin thunders nigh…”
(online text: Eng., Lat.)

13.1ff.: “Now the Euboean dweller in great waves,Glaucus, had left behind the crest of Aetna,/raised upward from a giant’s head; and left/the Cyclops’ fields, that never had been torn/by harrow or by plough and never were/indebted to the toil of oxen yoked.”
(online text: Eng., Lat.)

13.728ff.: “While all this happened, Telemus arrived/at the Sicilian Aetna—Telemus,/the son of Eurymus, who never could/mistake an omen, met the dreadful fierce,/huge Cyclops, Polyphemus, and he said,/‘That single eye now midmost in your brow/Ulysses will take from you.’ ”
(online text: Eng., Lat.)

“[Homer] tells us that king Æolus governed the Lipari Islands, that around Mount Ætna and Leontini dwelt the Cyclopæ, and certain Læstrygonians inhospitable to strangers.”
(online text: Eng., Grk.)

3.38: “We then come to the three rocks of the Cyclopes, the port of Ulysses, the colony of Catina” [the ‘port of Ulysses” is apparently at Ognina, north of Catania] (online text: Eng., Lat.)

7.2: “We have already stated, that there are certain tribes of the Scythians, and, indeed, many other nations, which feed upon human flesh. This fact itself might, perhaps, appear incredible, did we not recollect, that in the very centre of the earth, in Italy and Sicily, nations formerly existed with these monstrous propensities, the Cyclopes, and the Læstrygones, for example…”
(online text: Eng., Lat.)

“Even so from smoke-emitting Aetna did Polyphemus hurl the rock….”
(online text: Eng., Lat.)

“or when a Cyclops all black from the hot furnaces where the glowing bolts are forged finds respite and refuge in the Sicilian sea.”   (online text: Eng., Lat.)

Dictys, Chronicle of the Trojan War 6.5

“Then they had gone to the island of Sicily, where the brothers Cyclops and Laestrygon had treated them with every indignity and where Polyphemus and Antiphates, who were the sons of the former, had killed many of them.”
(online text: Eng.)

“Riviera of the Cyclopes”, east Sicily 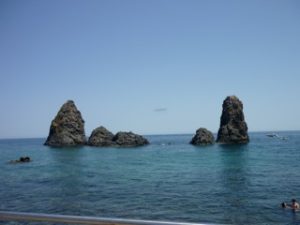 Rocks of the Cyclops (il Faraglione) 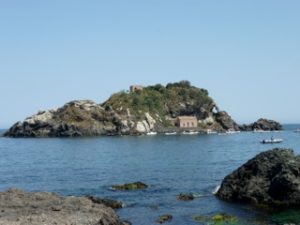